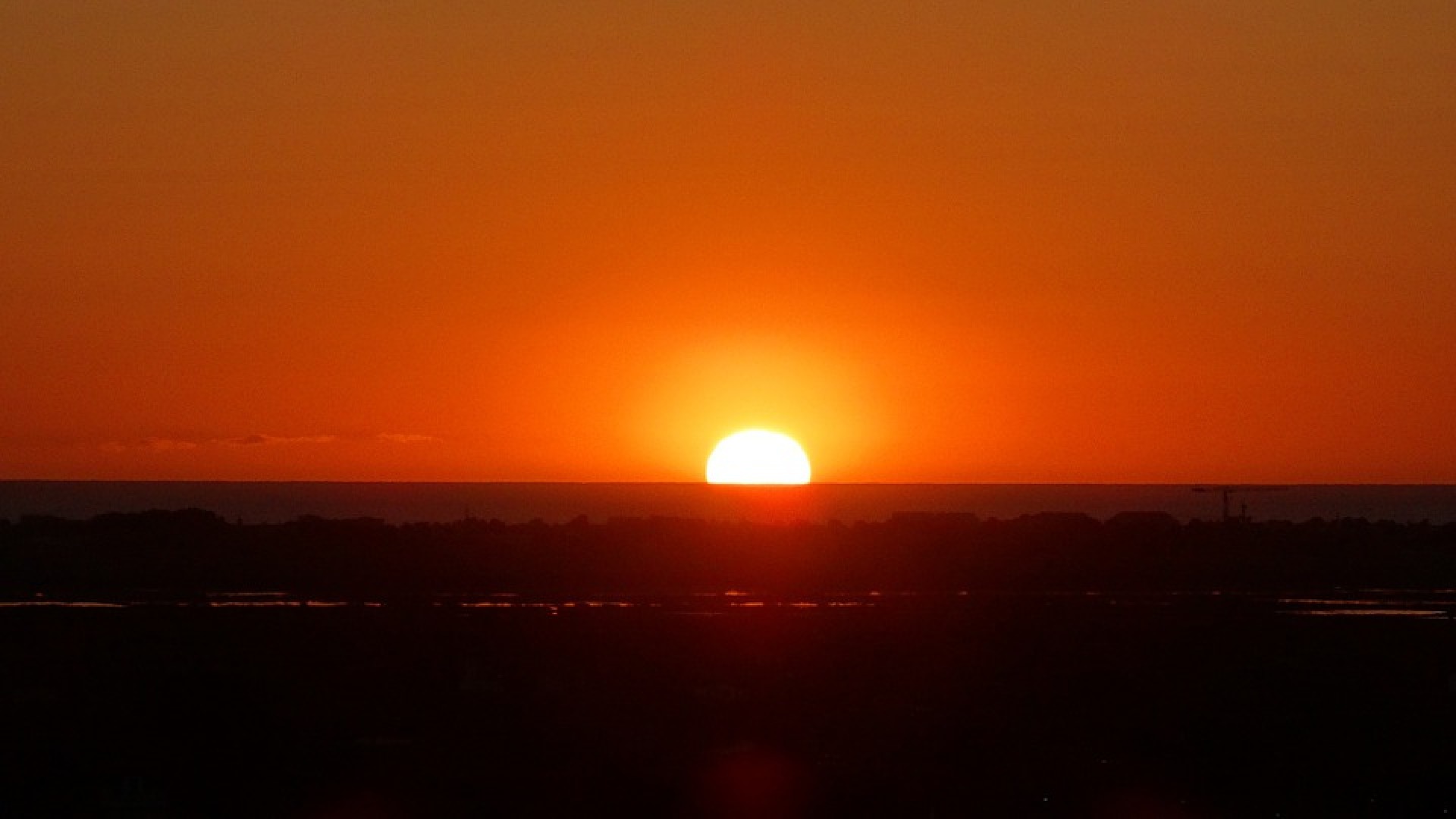 The following presents the final selection of saints to be represented in the first seventeen stained glass windows of our new church. The remaining five windows will be determined at a later time. Our partners at Conrad Schmitt Studios are tasked with bringing us a fresh representation of each saint in cut glass for review and approval. 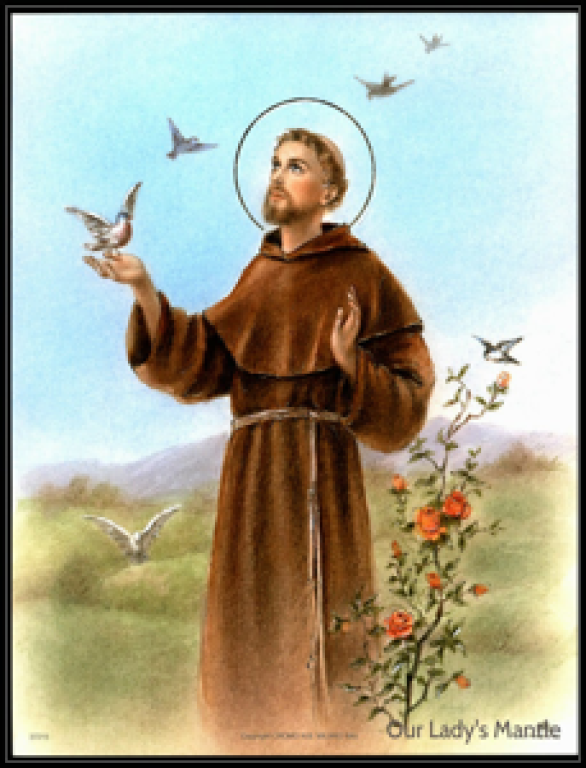 SAINT FRANCIS OF ASSISI (1181/2-1226) is the founder of the Franciscan Order. From the cross in the neglected field-chapel of San Damiano, Christ told him, “Francis, go out and build up my house, for it is nearly falling down.” He gave up all his possessions so that he would be totally free to say, “Our Father in heaven.” Two years before his death, he received the stigmata, the real and painful wounds of Christ in his hands, feet, and side. He died at 44. Along with Saint Catherine of Siena, he was designated Patron saint of Italy. He is also patron of animals and the natural environment. His feast is celebrated on October 4.

SAINT THÉRÈSE OF LISIEUX (1873-1897) is also known as Thérèse of the Child Jesus and the Holy Face, and was a Discalced Carmelite nun. She is known as “The Little Flower.” Thérèse has been a highly influential model of sanctity for many because of the “simplicity and practicality of her approach to the spiritual life.” She died at 24, and was declared Patron of the Missions. Together with St. Francis of Assisi, she is one of the most popular saints in the history of the church.

SAINT JUAN DIEGO (1474–1548), a native of Mexico, is the first declared indigenous saint from the Americas. He is said to have been granted an apparition of the Virgin Mary on four separate occasions in December 1531 at the hill of Tepeyac, in Mexico City. The Basilica of Our Lady of Guadalupe, located at the foot of the hill of Tepeyac, houses Juan Diego’s mantle or cloak on which an image of the Virgin is said to have been impressed by a miracle as a pledge of the authenticity of the apparitions, and is the basis of the veneration of Our Lady of Guadalupe. Juan Diego was beatified in 1990 and canonized in 2002. 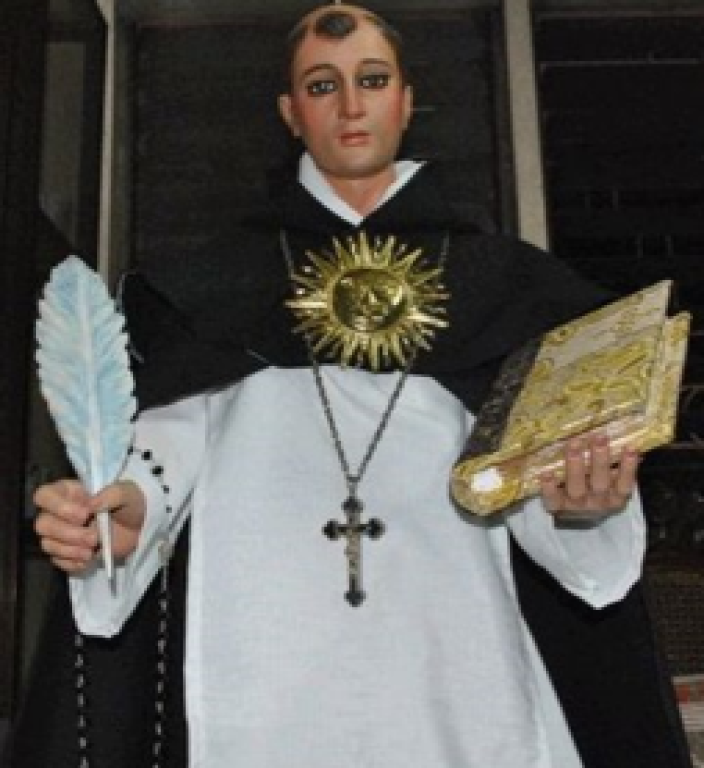 SAINT THOMAS​ ​AQUINAS​ ​(1225-1274),​ ​“the​ ​Angelic Doctor,”​ ​was​ ​born​ ​near​ ​Naples.​ ​​Being​ ​the​ ​youngest​ ​of​ ​four​ ​boys, his​ ​parents​ ​considered​ ​him​ ​destined​ ​for​ ​the monastery.​​ ​​Thomas​ ​was​ quiet and seldom spoke at the university in Cologne where he was appointed Master of Students by Albert the Great, who prophetically said, “You call him the dumb ox, but in his teaching he will one day produce such a bellowing that it will be heard throughout the world.” One day at prayer, Christ is said to have told him, “You have written well of me, Thomas. What reward would you have for your labor?” “Nothing but you, Lord,” he replied. He died en route to the 2nd Council of Lyon after taking ill and being cared for by the monks at the Cistercian Fossanova Abbey. 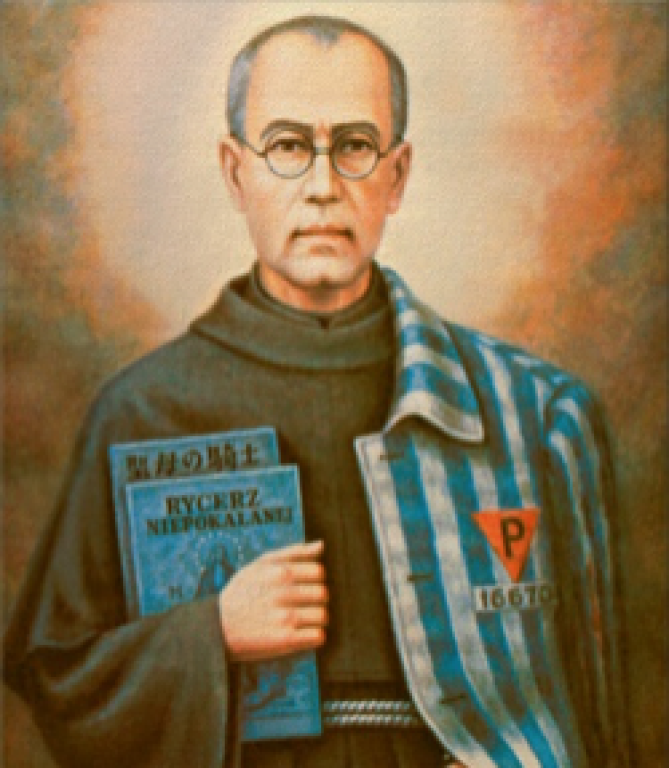 SAINT MAXIMILIAN MARIA KOLBE (1894-1941) was a Polish Conventual Franciscan friar, who volunteered to die in place of a husband and father in the German death camp of Auschwitz. He was active in promoting the veneration of the Immaculate Virgin Mary. Kolbe was canonized on 10 October 1982 by Pope John Paul II, and declared a martyr of charity. He is the patron saint of drug addicts, political prisoners, families, journalists, prisoners, and the pro-life movement. 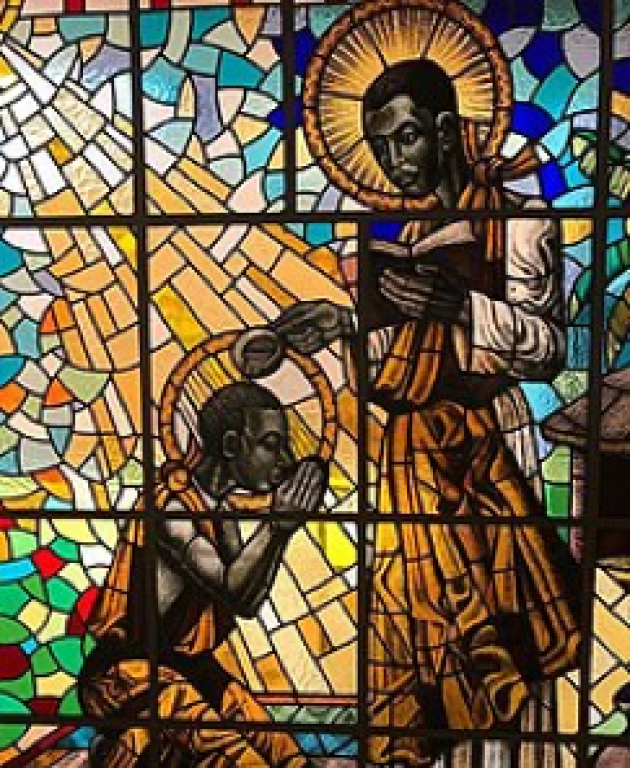 SAINT CHARLES LWANGA (1860-1886) was a Ugandan convert to the Catholic Church, who was martyred for his faith, and is revered as a saint by both Roman Catholics and Anglicans. A member of the Baganda tribe, Lwanga was born in the Kingdom of Buganda, the central and southern part of modern Uganda. As part of the king’s effort to resist foreign colonization, he insisted that Christian converts abandon their new faith, and he executed many Anglicans and Catholics between 1885 and 1887, including Lwanga. 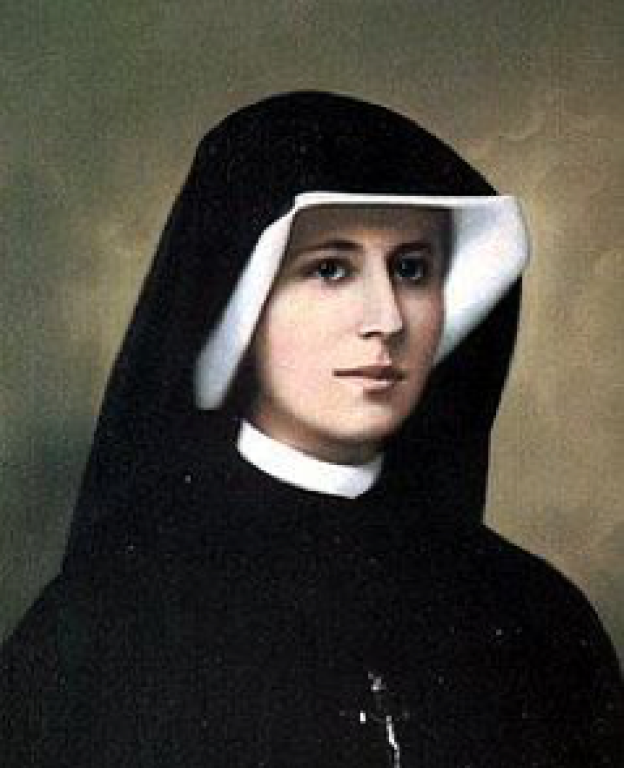 SAINT MARIA FAUSTYNA KOWALSKA of the Blessed Sacrament (1905-1938) was a Polish nun and mystic. Her apparitions of Jesus Christ inspired the devotion to the Divine Mercy and earned her the title of “Apostle of Divine Mercy.” Throughout her life, Faustyna reported having visions of Jesus and conversations with him. On one occasion, Jesus presented himself as the “King of Divine Mercy” wearing a white garment with red and pale rays coming from his heart. He asked her to become the apostle and secretary of God’s mercy, a model of how to be merciful to others, and an instrument for reemphasizing God’s plan of mercy for the world. She died in October 1938 after a long illness. 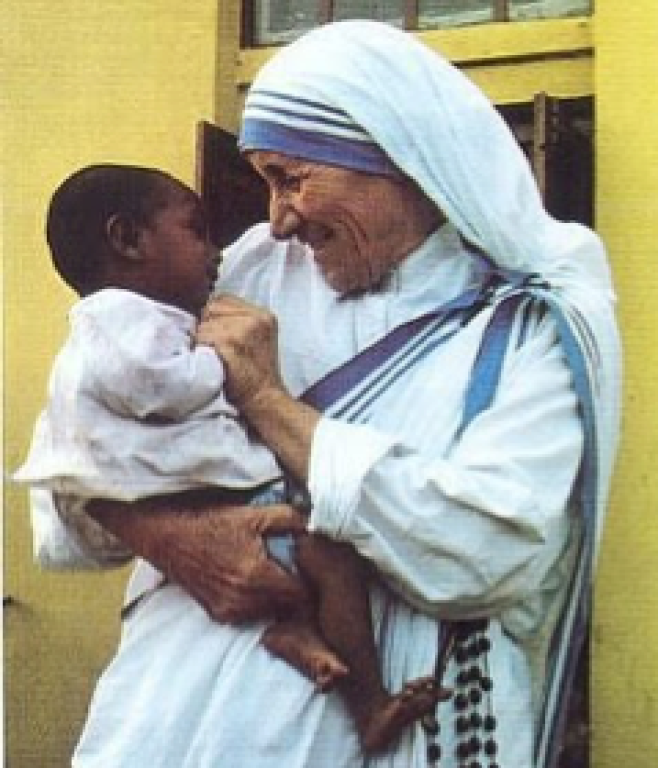 SAINT TERESA OF CALCUTTA (1910-1997) was born in Albania and died in India. Mother Teresa was one of the most prominent religious figures of the twentieth century. In 1950, she founded the religious order Missionaries of Charity. For the next four decades, Mother Teresa worked tirelessly on behalf of the poor. Her love knew no bounds, nor her energy, as she traveled the globe pleading for support, and inviting others to see the face of Jesus in the poorest of the poor. In 1979, she was awarded the Nobel Peace Prize. She died in India, and was canonized by Pope Francis on September 4, 2016. 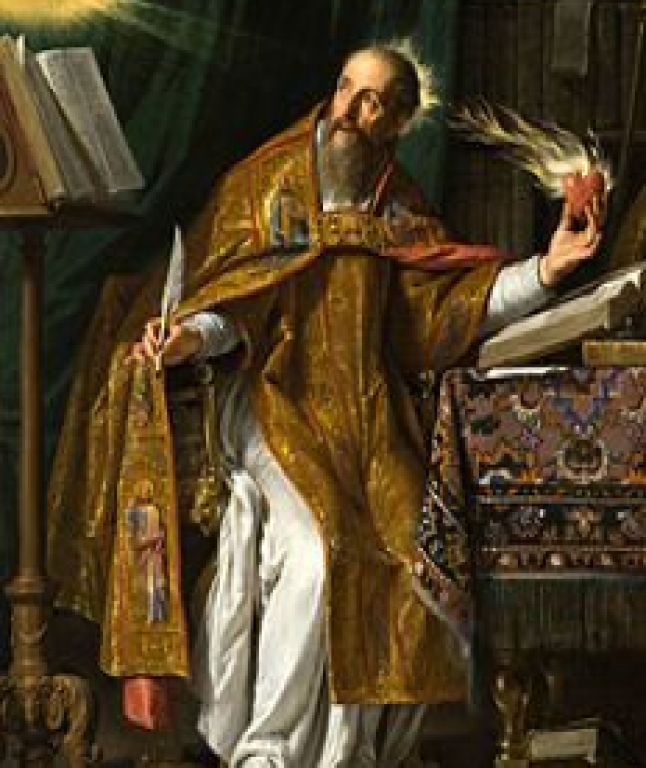 SAINT AUGUSTINE OF HIPPO (354–430) was an early North African theologian and philosopher whose writings influenced the development of Western Christianity and Western philosophy. He was the bishop of Hippo Regius in North Africa, and is viewed as one of the most important Church Fathers in Western Christianity for his writings in the Patristic Era. Among his most important works are The City of God and his Confessions. Augustine is the patron saint of brewers, printers, theologians, the alleviation of sore eyes, and a number of cities and dioceses. 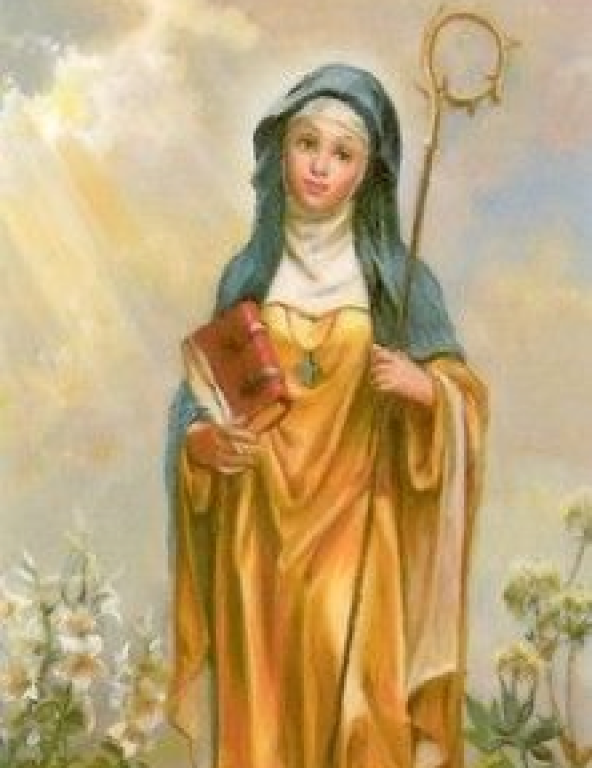 SAINT MONICA (322–387), also known as Monica of Hippo, was an early Christian saint and the mother of St. Augustine. She is remembered and honored in most Christian denominations, albeit on different feast days, for her outstanding Christian virtues, particularly the suffering caused by her husband’s infidelity, and her prayerful life dedicated to the reformation of her son, who wrote extensively of her pious acts and life with her in his Confessions. Popular Christian legends recall Saint Monica weeping every night for her son Augustine. 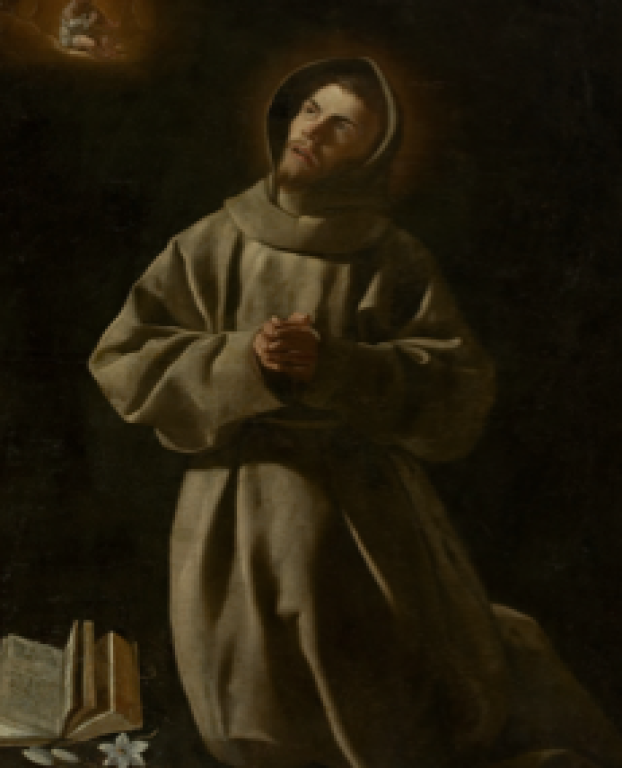 SAINT ANTHONY OF PADUA (1195–1231) was a priest and friar of the Franciscan Order. He was born and raised by a wealthy family in Lisbon, Portugal, and died in Padua, Italy. Noted by his contemporaries for his powerful preaching, expert knowledge of scripture, and undying love and devotion to the poor and the sick, he was one of the most quickly canonized saints in church history. He is also invoked for the recovery of lost things. 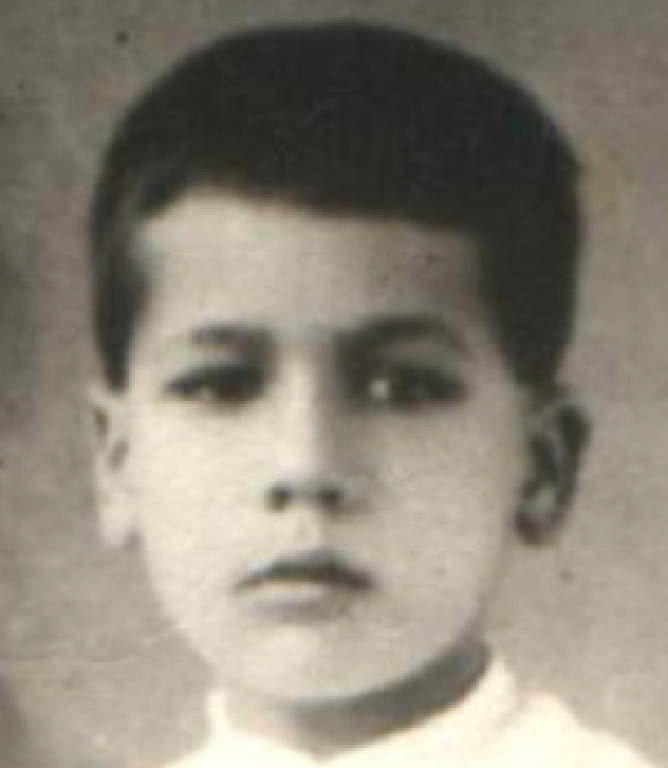 SAINT JOSE SANCHEZ DEL RIO (1913-1928) is Mexico's newest saint. At age 13 the boy became a flag-bearer in the Cristero army, who were fighting to remain Catholic in the face of anti-religious government decrees. Captured by government troops, he was imprisoned, abused, mutilated, and ordered to renounce Christianity, but José refused. Hacked with machetes, stabbed with bayonets, and finally shot, he died just six weeks before his 15th birthday. He was canonized on 16 October 2016 by Pope Francis. 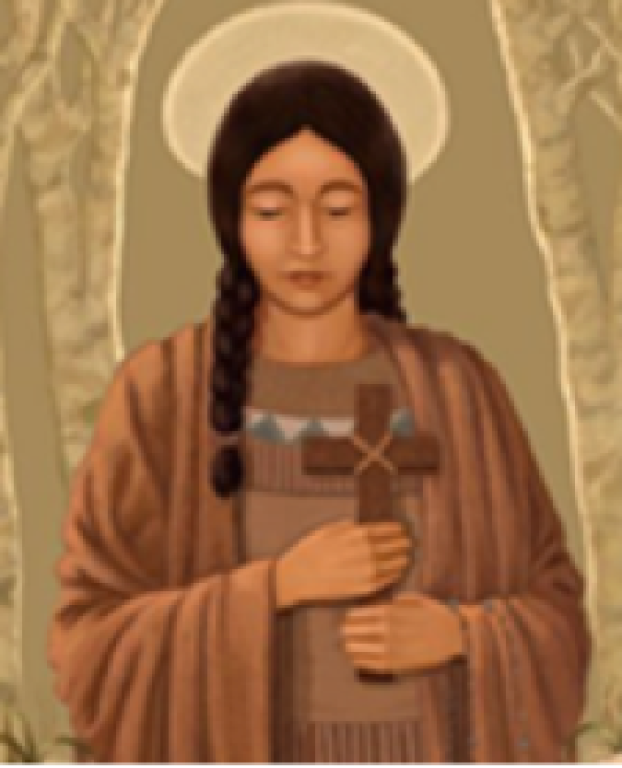 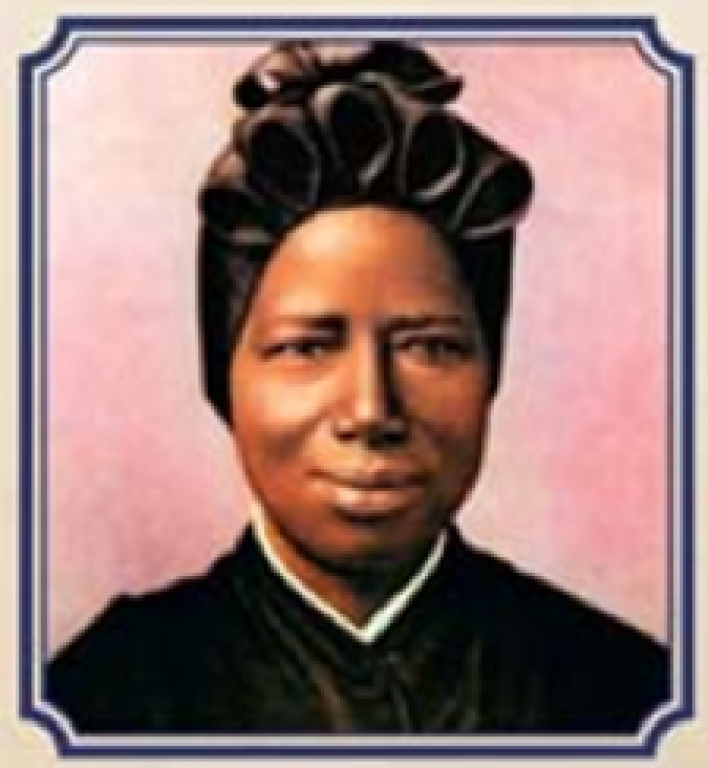 SAINT JOSEPHINE BAKHITA (1869-1947) was born in Darfur, Sudan, to a prosperous family. She was kidnapped by Arab slave traders at age 9, and forced marched 600 miles to the nearest slave market. She was bought and sold numerous times over the next 12 years, experiencing much humiliation and suffering, both physical and moral, before being taken to Italy, where she became a Canossian sister, and served there for almost 50 years. She was canonized in 2000 by St. Pope John Paul II, and is the patron saint of Sudan, and victims of slavery and human trafficking. 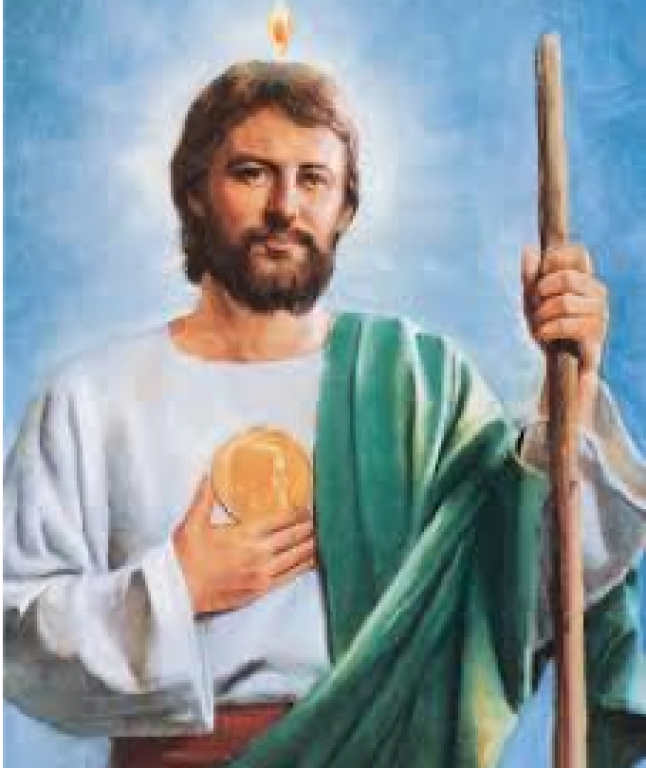 SAINT JUDE (1st Century AD) is also known as Judas Thaddaeus, one of the 12 apostles of Jesus. He is the Patron Saint of Hope, and of lost causes. He suffered martyrdom for his faith either in Armenia or Lebanon. His feast day is celebrated on October 28. Saint Jude is often depicted in art with a staff and a tongue of flame above his head. This represents his presence at Pentecost, when with the other apostles, he received the outpouring of the Holy Spirit.  Sometimes he is represented with a scroll or a book, for the epistle in the New Testament that bears his name. 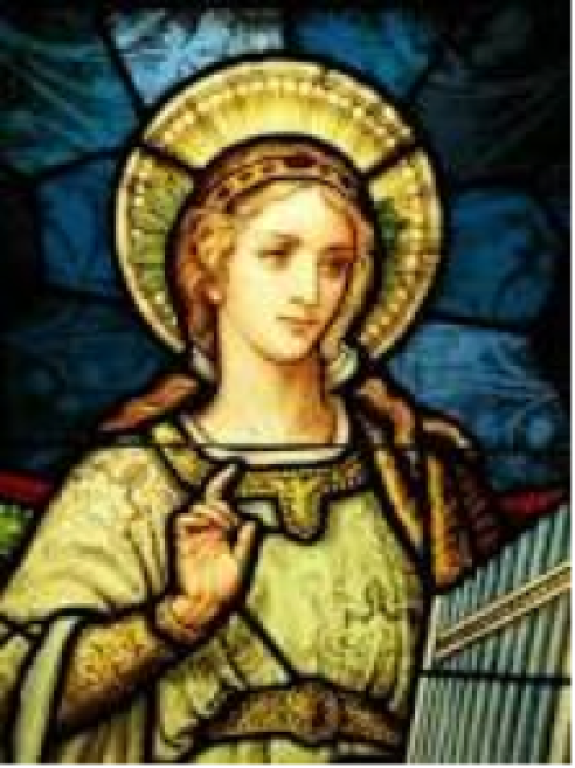 SAINT CECILIA (200-230 AD), born in in Rome, Italy, is the patron of musicians. The church celebrates her feast day on November 22. Cecilia is one of seven women mentioned in the Canon of the Mass. She was a noble woman of Rome who was married to Valerian, a pagan Roman. She was martyred along with her husband and brother-in-law. She has become a symbol of the Church’s conviction that good music is an integral part of the liturgy, of greater value to the Church than any other art. 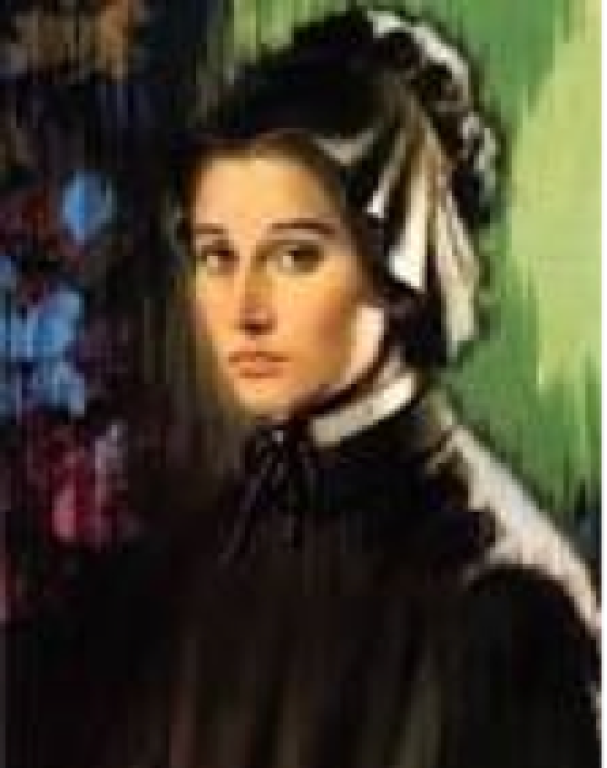 SAINT ELIZABETH ANN SETON (1774-1821) was born in New York City, and is the first native born citizen of the United States to be declared a Saint. She was married young to a wealthy William Seton, and was given care for his seven brothers and sisters after his father’s death. They moved to Italy after losing everything, and upon William’s death, she came to the Catholic faith. She opened the first free Catholic school in Baltimore, and founded an order of sisters. She died in Emmitsburg, MD. She is venerated for her intercession against the death of children, and of parents, and on behalf of widows, in-law problems, and opposition of Church authorities. She was declared a Saint in 1975 by Paul VI.